My attempts to research and discover any archival details (original manuscript, photos, etc.) from C.K. Shepherd’s 1922 book, Across America by Motor-Cycle, were stymied for years because I could not discover his full name. Ultimately, I resorted to a “brute force” approach. I logged into the WWI military records section of The National Archives in the UK and then reviewed the records of each and every person with the last name “Shepherd” (and even “Shepard”), trying to identify individuals with facts in common with C.K. about which I already believed to be true. It took a while, but in May 2017, I found conclusive records showing that C.K.’s full name at birth was Charles Kenilworth Shepherd. This discovery was the turning point, because I now had a complete name to search for. Part of my work now focused on learning what I could of whatever became of C.K. after he published his book.

Armed with his full name, I began building a family tree using various tools and resources often used in genealogical research. In June 2017, I discovered that his first wife died in 1938 and that he legally changed his name to Charles Kay Shaw about six months later. He then remarried to Nora Tarpey about six months after changing his name, just as World War II began. I was able to locate and order a copy of C.K.’s death certificate from 1971, and a week or so later, a copy of Nora Shaw’s death certificate and probate (which included her last will and testament). I observed that C.K.’s death certificate said the “informant” of the death was “Charles Drury Shaw,” identified as C.K.’s son. I began searching for records of Charles Drury Shaw. I found one who I thought was a likely match, a physician published in various places, most recently in Australia. But I was unable to make contact. So I turned my attention to the will of Nora Shaw. She had named her two children to receive her assets, with Charles Drury Shaw being one of her children. But she also decreed that, in the event Charles Drury Shaw predeceased her,  his share of the inheritance would be divided equally between his two children, who Nora Shaw named, including one Timothy Charles Shaw. 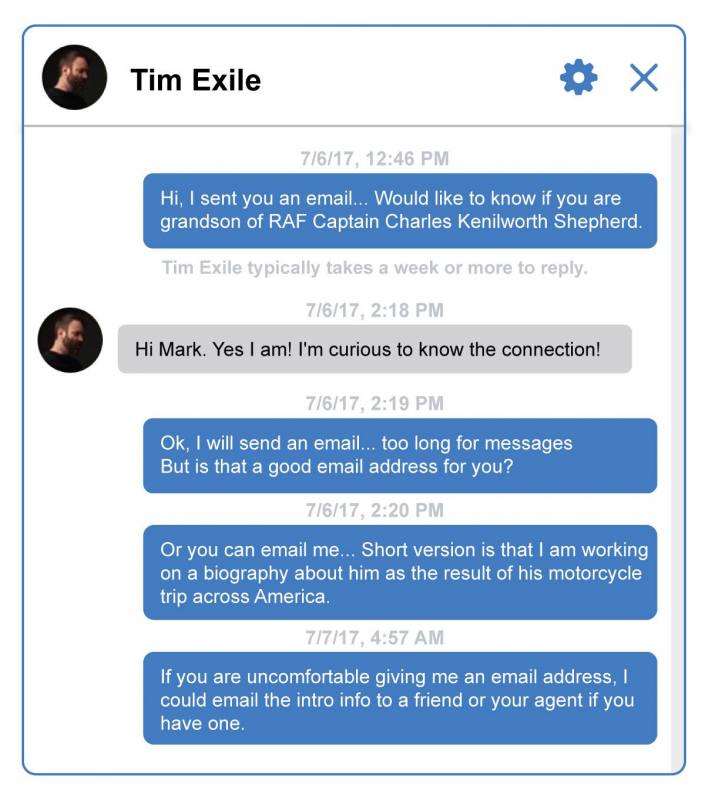 So I set about trying to find Timothy Charles Shaw who I believed would still be living.  After a few days, I had found someone whose information all added up, born in 1978… a musician, performer, and entrepreneur in London. He seemed to be into all things electronic and was performing under the stage name Tim Exile. I searched for his email address and also searched on Facebook. I found an email I thought was his, sent him an email and, a few minutes later, sent him a Facebook message. Facebook had recently split their Messenger app separate from their standard interface, and the new app required the recipient to sign up to receive messages, so I was unsure if the Facebook message would ever reach him. But he replied an hour and a half later! The image at right is a recreation of the actual content of the exchange that followed.

What follows is the email exchange that occurred (beginning with the email I sent him just three minutes before my first Facebook message):

The rest, as they say, is history (I did explain to Tim all of the above as to how I found him). Charles and I carried on by email for some time. I flew over to meet him a few months later and we have been in frequent contact since. Charles is planning a special trip to America to meet up with me at the Grand Canyon. I was humbled and moved when reading the first two sentences that he wrote for the Foreword of my new book, Across America by Motor-Cycle – Fully Annotated Centennial Edition:

My father had been dead for 46 years when Mark Hunnibell brought him back to me. Mark first identified my son from my mother’s will and contacted me in July 2017.