The bulk of Captain C.K. Shepherd’s 1919 transcontinental journey on his Henderson motorcycle is described in his 1922 book, Across America by Motor-Cycle (a book that had been in the public domain in the U.S. for years but is still protected by copyright in the United Kingdom) but I recently fully restored, remastered, and reset it. It is newly available in print, eBook (Kindle), and even a stunning new audiobook.

As wonderful as C.K.’s story is, he left many readers with unanswered questions, myself included. With increasing intensity over the past decade, I set out to answer all those questions and then some. The result of my work is contained in Across America by Motor-Cycle – Fully Annotated Centennial Edition. This new book contains C.K.’s original 1922 manuscript, but I have added nearly a thousand notes, photos, and illustrations, with many previously-unpublished photos. As of June 4, 2019, my new book, Across America by Motor-Cycle – Fully Annotated Centennial Edition, is available in bookstores and online at amazon.com and barnsandnoble.com. 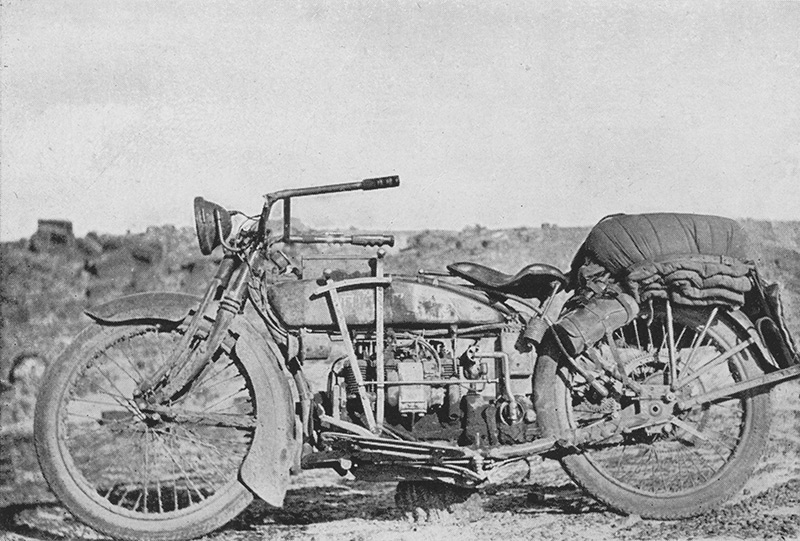 The new book contains a complete biography of C.K.’s life before and after his 1919 ride and I will try not to spoil too much of the surprise here. However, revealing some key details here seems unavoidable.

C.K.’s was born at home in Birmingham, England, in 1895 as Charles Kenilworth Shepherd. I have seen some writings online stating that his first name was Cyril, but this was the apparent result of misidentification of the wrong military records. At age 19, near the beginning of the war that is now known as WWI, C.K. enlisted in the British Royal Flying Corps (RFC) and was immediately trained as an aircraft engine mechanic and sent to the Engine Repair Shops (ERS) in near Pont de l’Arche near Rouen in France. While there, C.K. received swift promotion and then commission as an officer in charge of some 300 men at the ERS.

One of C.K.’s fellow officers at ERS was Thomas Stevenson, Jr., who C.K. called Steve in both the book, and in real life. Like his father, Steve had been born in Scotland and had emigrated to North America before the war. Once the war broke out, Steve headed back to England to enlist, but stopped to visit his father in Cincinnati on his way back. So when C.K. wrote in the book that Steve planned to head back to “Dixieland” to visit the “old home-folks,” Steve was talking about going back to be with his parents (which he did, eventually becoming a US citizen).

Although there was apparently a conscious decision made in the book to frame C.K.’s trip across America solely as a personal recreational tour to relax after the war, there is ample evidence that there were business purposes for the trip. There is also the question, which I still have not answered: What was the source of funding for the trip? It seems most likely that he had financial backing from his family, but I have no evidence to support that theory. Still, this theory is based on my discovery that, following in his father’s footsteps, C.K. was an accomplished inventor with several patents to his name, some of which were applied for just before he departed Liverpool for America on May 23, 1919 when C.K. was just 23 years old. When he arrived in the US from Canada, he reported that his destination was Persons Manufacturing Company in Worcester, Massachusetts. Persons was a major manufacturer of motorcycle saddles. In his series of articles in Pacific Motorcyclist and Western Wheelman from August through October 1919, and in newspaper accounts of his ride while in progress, C.K. made it clear he was seeking ways to promote his inventions including meetings with patent attorneys.

After he arrived in San Francisco and disposed of “Lizzie,” C.K. took a train from San Francisco back to New York, with a stay of several days in Salt Lake City. It also appears that he went up into Canada before coming back across at Niagara Falls from the Canadian side and then continued down to New York before boarding the S.S. Celtic on September 10, 1919, arriving back in Liverpool September 19, 1919. All told, C.K. spent four months away from home on this journey.